Here is a coral poppy that I painted the week of December 18th. It began life as a much larger painting, taken from a photo of an unusually shaped poppy with ragged-edged petals. This poppy was actually a bit lopsided, with several layers of petals extending up into the upper right corner of the field of view, but it was very interesting-looking, which is not something you can say about most poppies, pretty as they are.

When I was done with the painting and stepped back to take a look at it, it struck me that it looked a lot like a portrait of a cooked shrimp. I looked back at the original poppy photo, and realized that it had slight shrimp-like qualities as well, which had been brought out by my treatment.

I couldn't unsee the shrimp no matter how hard I tried. Nor could I simply let it be, and accept it as a shrimp-like poppy; I'd have to mention the painting's shrimpness to everyone who saw it, because I cannot tell a lie. I also knew that the minute they saw it, they too would see its true nature (I knew this because I told my Registered Nurse Buddy about it being a shrimp, and her response was "OMG. I see it"). If it had resembled something other than a cooked shrimp, something with just a bit of dignity, but no.

So I cut off its tail and made it a small, close-in portrait of a pretty poppy. Now you all know that it was actually supposed to be a cooked shrimp; however, you'll have to imagine its tail.

Posted by Carolyn at 3:25 PM No comments:

This is a tiny (6" x 6") study for a larger watercolor painting. I tried it after discovering that painting glass might be easier than it looked (while painting "Tired Rose"). While it was fun to paint, and I kind of liked the little result, apparently painting this little study scratched the itch, because I haven't gone back to it. 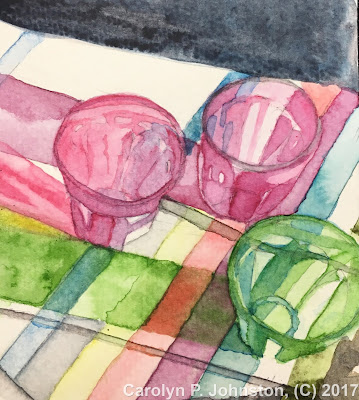 In late October, we were about to get our first hard frost, and I rescued one of the last roses from the front yard. It was getting just a little past it, but was all the more interesting for that (rather, I like to think, like myself). I stuck it into an olive jar by the kitchen window.

Over the next couple of days, as it started getting orangey-brown spots, the colors started to look really interesting, and I took some photos of it and started a painting. The easiest part of the painting, believe it or not, was the glass jar -- I struggled to get the flower colors as dark as I wanted them to be, and to convey the depth of the petals. 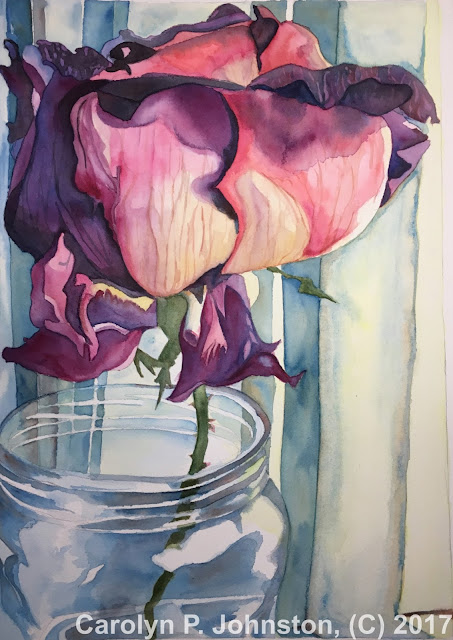 In the end I was a bit burnt out on it, and then (you know how you do) I asked some friends for their opinion of the result. The Husband loved the technical work on the glass jar, but said he couldn't make visual sense of the flower; The Abstract Artist said that he thought the glass jar a bit mundane, but thought the rose was transcendent and said something wonderful about roseness in general. I thought, fine, something for everyone, and put it away so I wouldn't be tempted to destroy it.

When I took it out again, a month later, I found I very much liked it, from the glass jar to the rose. Sometimes you have to step away from something in order just to forget that you did it, and experience it on its own merits, untainted by its association with your inadequate self.

I used a lot of different Daniel Smith quinacridone colors on this painting -- I love almost every quinacridone paint they make. There is a light cerulean blue wash on the walls, but the dominant blue is Prussian blue, which I continue to love from the tube even though I know it is a color that can be easily mixed.

The stem was painted mainly with a Daniel Smith Primatek paint, Green Apatite Genuine, which I bought on the recommendation of Jane Blundell. This is a Primatek color, meaning it is made of ground up semiprecious stone, and has interesting sparkle and texture. I normally avoid granulating, opaque colors like this one, but it's just so pretty as a final touch -- a perfect dark green.

We've had a very dry fall here on the Front Range. Day after day, it's been gorgeous and in the 60s... disaster must be imminent, right? Around here, it usually comes in the form of fires if we go long enough without snow.

But the midafternoon light has been gorgeous. This painting is of the southwest corner of the house, where we have some ornamental grass growing. We are close to the winter solstice and the low sunlight is a cool kind of golden color. This painting uses three colors: quinacridone gold (DS), alizarin crimson (WN), and Prussian blue (WN); I also used a bit of Hansa yellow light (DS) in the initial wet wash. I was surprised at how cool the final result was (cool as in color temperature, not cool as in nifty). 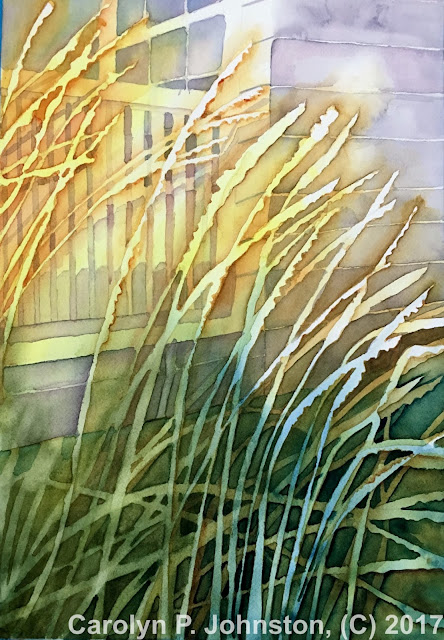 Posted by Carolyn at 2:11 PM No comments:

Carolyn
I am a compulsive watercolorist living in Boulder County, Colorado.